Q. What is the Ontario skate scene like overall?

Ontario is something, I’ll tell ya that. The community is growing constantly and I find that super rad. I wouldn’t say that the Ontario community is a community that always skates together, but we squad up whenever the time comes. Especially for events, that’s when everyone is out.

Q. How many people do you usually skate with?

At the average session somewhere around 2-5 other dudes. More than not I’m usually skating with Andrew Flanagan, Jason Bull, Sam Flint, Nat Yupangco, and some other rad locals. On weekends when we get the chance to squad up somewhere in the city or in the GTA (Greater Toronto Area) we usually do.

Q. What are some of the go to shops in the area?

I stick to those who support the scene, and that’s Longboard Haven. Rob and Chicken are some really good dudes who know what’s up in the scene and know how to keep the kids happy.

Q. Are there any local events?

There are every now and then. I’m actually hoping to start a paths series this summer. We really only have one slide jam hill, it’s really steep and has a couple turns so everyone loves it. We have another hill in a more desolate area though. It’s not as fast, but it’s a great slide jam hill. However, we host the best event ever. The Toronto Board Meeting, where a large amount of dudes put some suits on and skate all through downtown. Roughly 1000 people show up each year. It’s rad. We also have annual events which bring us all together. Always a swap meet in early April or late March. It’s a slide jam and swap meet, so people can get some new gear, then come skate a fun hill. Another annual event is the Jane Paths race. It’s a slow bike path with 2 hairpins, both are really awkward so it’s kinda hard to skate. It was raining super hard this year so it got sketchy and rowdy.

Q. What is your favorite part about the Keystone? (if both of you guys yould answer this one that would be great)

I like a lot about it. I think my favourite part is the diversity of riding you can do with it. Having a tail is really cool cause I can throw blunt slides and mess around when cruising. Then at the same time I can take it to a hill and go obscenely fast and comfortably drift if I need to.

Gotta make sure to hit up the Board Meeting of course. I really wanna get to Central Mass. More than anything I gotta get out west again. Main goal is to get back to Seattle for a week and get some skating in with homies, and skate Slug Wars. Slug Wars is da bes. Maybe California in the Winter to escape the garbage weather.

Q. What is your favorite place to skate?

If it were to choose one, it would be California. SMR is amazing and I could skate that run all day every day. Then there’s Tuna. Miles of one way downhill glory. There’s runs on runs everywhere. My trip there in March was incredible. Gotta go back. If it’s not California, it’s Seattle. Slug Wars is da bes. There’s endless amounts of fun runs out there. 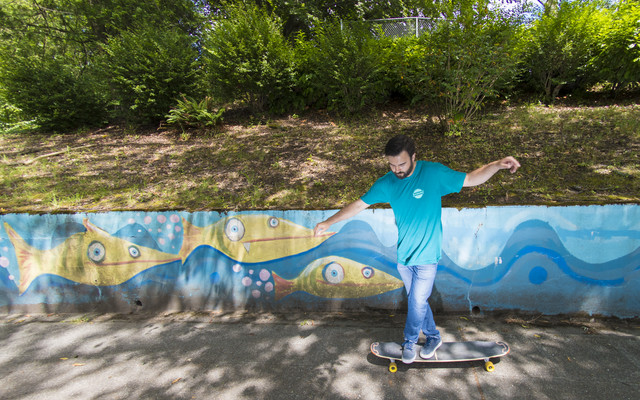