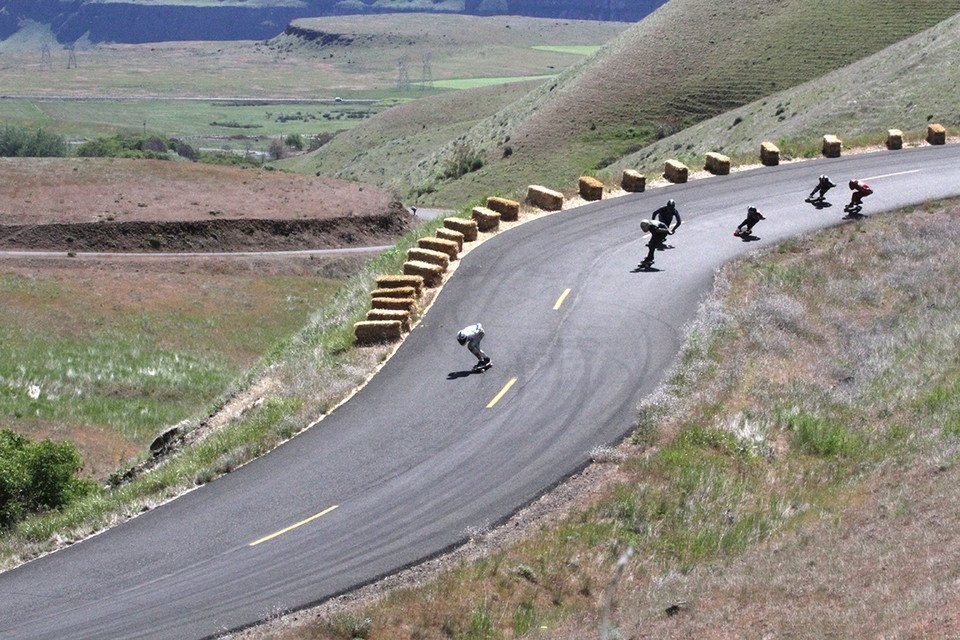 The first event of the season for me has always been the Spring Freeride at Maryhill, and after a long winter, I was ready to skate.

We picked up the van from the shop and headed South to Portland to pick up Emmet White from his place. Immediately after doing so, the van decided it didn’t want to work anymore so we pulled over and waited for a tow. Fortunately the DB Longboards crew came and saved us by hooking it up with a swanky rental car (Toyota Sequoia). With our full crew we headed to Biggs Junction where we stay at this quiet little motel and prepared for the following day.

We woke up way too early, put our freshies on, and headed out to snag some much needed coffee and breakfast. From there it was a straight shot to the hill. We drove onto the property and then through the open gate where we immediately saw the skate fam. The skate fam for those of you who don’t know is a pretty regular group of skaters that you see at most of the events you go to. They come from all over the place, ride all different types of set ups, but all have one goal in mind, to make it down the hill as fast and with as much style as possible.

The day started off cold, so it was very nice to be in leathers and drinking hot coffee. This free ride, being so early in the year, comes with a chance of rain. Luckily though it was dry all day, colder and windy, but dry. I made it my mission to get a ride on the door of the uhaul, as sitting in the back sucks. Having secured my spot, I flipped up my visor and felt the wind on my face as we all headed up the hill to prepare for the first run.   Got to the top of the hill, socialized with friends, and then found who I was going to take my run with. First run rules, always take it nice and easy. Visor down, kicked in, and dropped into my tuck. Even though it had been almost 6 months since I had skated Maryhill, I hadn’t forgotten a thing. I knew exactly what line to take. Weaving through all of the hills curves, I finally made it to the bottom of the hill. Legs burning, exhausted, but ready for more.

The rest of the day at the hill remained colder than usual. I took a ton of runs with friends and strangers, only taking off a few runs for food and drinks. There were no major injuries on day one so the riders were able to get in a good amount of runs.   After day one of skating we went back to the hotel, changed out of our suits, put on street clothes, and headed into The Dalles. Upon getting into town, we grabbed some food at the always lovely Clock Tower Ales and headed to our next destination, a historic highway just outside The Dalles, with good speedy straights, and many loopy corners.

We shuttled runs there until we couldn’t walk, and then decided to head back to the hotel. On the way back we stopped by a stroke in The Dalles to pick up some ice cream, snacks, and beer. Once fully supplied and back in the hotel, we chilled out and watched TV for a bit, chatting about the day and all of our runs and sketchy encounters. We then knocked out for the night.

The second day was much like the first, colder than usual but dry. This day took off a little slower than the first. We arrived to the hill later than the previous day, to find less people there. From skating so hard the previous day, most of the skaters were extremely sore, and thus, slept in even more than we did. This meant that instead of using the standard three U-Hauls to shuttle people up, we only needed two, and even then, they were pretty empty.

As the day approached noon, most of the people were there and skating. There was one major crash, which sent someone I knew to the hospital, so that was a bummer, but luckily it was the only big crash of the day. The sun peeked out a bit more towards the late afternoon and everyone was able to get the most out of every run. Towards the end of the second day, people were exhausted even more, tons of people were leaving early, but we stuck around until the last run. I was already dead tired, but Emmet took one more run and then we packed up and headed for Portland.   Once we got back to Portland we got to deal with the fun of driving across town to the mechanic, then back across town in both cars to drop off the rental, then back to Emmet's house where we were fed an awesome dinner.

From there we said our goodbyes to Emmet and his family, and proceeded to our next destination. Because we had fewer people in the van this trip, it was important that gas was still paid for. Enter, Craigslist Rideshare. I had posted an ad a few days prior offering a ride from Portland to the Tacoma area provided the person wasn’t sketchy as all hell. Fortunately the guy we picked up was pretty cool, and made conversation during the drive back. We dropped him off in Olympia, drove to the shop, and unpacked the van half asleep. The drive from the shop home was one of the most painful things I have ever had to do, as I way on the verge of falling asleep the entire time.

Overall the trip was a massive amount of fun, filled with a lot of skating with good people, and I cannot wait for the next freeride.

Rider: Emmet White - DB Longboards Coming through the second repeater (cowgate) in the middle of a pack.